Neil and Masayo are shidoin (senior instructors) within the national organisation to which our club belongs, the UK Aikikai. 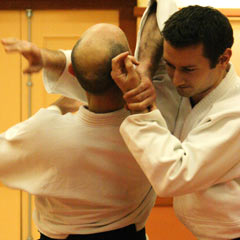 Neil Mould 5th dan has been studying Aikido since 1997. His main instructor is Gordon Jones shihan 7th dan. Neil has practised under many accomplished aikido teachers both in the UK and abroad, including trips to Australia and Japan. He opened the Sotenjuku club in early 2004. Neil’s thoughts on aikido and the right approach to training in the art are described below. 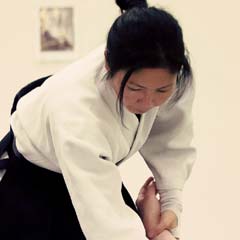 Neil is supported by Masayo Susumu 5th dan. In addition to teaching at our club, Masayo sometimes translates for visiting Japanese sensei at courses, both in the UK and abroad. 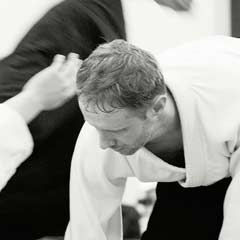 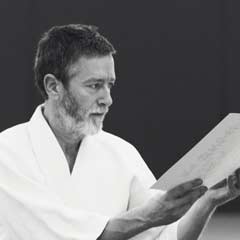 We also have two assistant instructors: sometimes either Stu or Rob, both 2nd dan, will lead a class.

All our instructors have up-to-date coaching qualifications recognised by the UKA.

Aikido is a martial art that has a deep spiritual side as well as a technical martial side. Both sides are not easy to understand and take many years to develop. Finding the balance and depth between the two is the goal an aikido student tries to master within their lifetime.

The principle of aikido is not to confront power head on. It is more redirection and control of this power, with the help of basic foot movement and relaxed yet focused body and mind. Please do not make the assumption that, because an Aikido student avoids power head on, Aikido students are weak and have no power. There are a great many instructors in the world that posses a great deal of internal energy or Ki/Kokyu and can be immovable if desired.

Aikido is an art of blending. This is not only in the context of an attack but with everyday situations. With any art, to practise what is taught only on the mat is not going to be of any benefit. You must try to incorporate your learning into your daily lives.

Ukemi plays a large role in aikido and tends to be overlooked. People who have no experience of Aikido and watch from a distance can misunderstand ukemi as “falling over”. Uke (the person taking ukemi) is the aggressor when practising aikido. Uke would attack tori (the person performing technique). Ukemi is allowing your partner to practise their technique to its fullest by extending and stretching your body; so in turn it forces Tori to extend their technique. When taking ukemi you should make sure your attack is positive and directed to the area intended. Also, you should make sure your intention to attack your opponent is there from start of technique through to finish.

The weapon work in aikido complements the basic body movements used in the open hand art. The weapon work is laid out in kata forms both for the individual to practise and for partner work. It is a very important part of aikido as you learn, amongst other things, your basic posture, your ma-ai or striking distance between you and your partner, and improves your relaxed movement to perform your cut. When practised sincerely, it also trains a student to keep their mind focussed and not get slack or shorten their movements when performing techniques, for the simple reason that either their partner or themselves may get injured in some way.

The weapons used in aikido are mainly the bokken (wooden sword) or jo (wooden staff). The bokken is designed to resemble the katana and the jo can be considered as a spear. Some aikido clubs train in the use of the iaito, which is a katana with a blunt cutting edge. This is mainly individual practice and concentrates more on the way the sword is drawn from the scabbard although it does incorporate movements based on cutting an enemy down.

A basic point of aikido but the most difficult to obtain and master is the use of ki/kokyu when performing techniques instead of using brute strength. With the correct technique and a concentrated ki/kokyu, a smaller person can down a larger person who ordinarily could not be put down.

Neil is shown airborne on the cover of the book Aikido by the late Peter Brady 7th dan. The author was a shihan in the UKA, so if you’re considering buying a book on aikido, this one is particularly appropriate to the style we practise.