Our Egham classes are especially good for beginners! 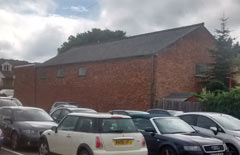 If you’re driving, there’s a car park right outside the hall. It’s free to park after 6pm.

Trains to Egham from London on Tuesday come from Waterloo via Clapham Junction. Egham is on the Waterloo-Reading line.

Your first class is free.
After that, you pay monthly mat fees.

Note that the class starts at 8pm promptly — please come a little earlier to say hello and help put the mats out.

We often go to the pub after class (the Crown, which is nearby) if you’re not in a rush to get home after training.

Come out of the station on the north side, which has the ticket office on it. If you’ve just come from London you need to cross the tracks using either the footbridges or the level crossing.

Our dojo really is that close to the station. If you go past the little convenience store, tanning studio or tattoo parlour, turn back because you’ve already gone too far!

If you’re walking/cycling down from the back entrance of RHUL, the route is the same as how you’d get to the station, through the houses: when you come out of the college grounds, you’re on Lynwood Avenue. Turn right onto Ripley Avenue, then left onto Clarence Street, right onto Osborne Road, and finally, at the end, left again. That’s the wiggly bit done.

You’re now on Rusham Road, which runs alongside the railway. About 50 yards before that comes out by the level crossing, there’s a footpath off to your left that goes to the Wasp Farm carpark, where the hall is.

Don’t worry if you miss that though, because it’s all close. If you get as far as Station Road (which has the level crossing on it), just turn left, walk past Beckingham Metro, and turn left again at the dentist. The car park is ahead of you.

Note for history buffs:
In the past, we’ve also trained at other Egham venues. We used to train at Egham Leisure Centre, and before that in the Social Hall in Englefield Green. We moved into the Band Hall in 2015.